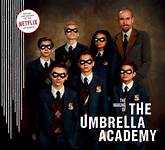 Have you ever watched a show on Netflix? Maybe Bunk’d or Zombies? Well, I’ve watched a lot of shows on Netflix and they have all been so good! But there is one that I really recommend. It’s rated TV-14. The genre is action and adventure and that is my favorite genre for shows so I really enjoyed it. There are 7 main characters in this show. Fives is played by Aidan Gallagher. Luther is played by Tom Hopper. Allison is played by Emmy Raver Lampman. Klaus is played by Robert Sheehan. Ben is played by Justin H. Min. Vanya is played by Ellen Page.

Diego is played by David Castaneda. They all have magic powers. Fives can teleport to wherever he wants. Luther has super strength. Alison can whisper anything in anyone’s ear and then they will do what she told them to do. Klaus can see the dead which two of the characters can do and Klaus can see one of the characters that are dead.

Ben can also see the dead that was his power before he passed away when he was little so they talk to each other all the time. Vayna is the dangerous one because she has the power to do anything she wants or kill anyone she wants. She just thinks about it and then does it. Diego has mad knife-throwing skills he can hit anyone with a knife or anything with just a throw of a knife.

The setting in season 1 is in Toronto, Canada and the setting of season 2 is in Dallas, Texas. Fives is really the main character. He is actually 54 because he screwed up the timeline so he looks like he’s 13 but really he’s a 54-year-old in a 13-year-olds body. Season one is about how they try to figure out how their father died and to try to stop the apocalypse and Fives knows this because he got stuck in the timeline and so he saw all his family members lifeless on the ground.

Then he got back and did not stop it but he saved his family so he can teleport so he teleported them to the wrong timeline and he got stuck in 1960 with his family and they all started new lives there and then they finally found a way back home but then Allison couldn’t make it to the portal so they have to start all over again and they don’t have another way back home so they have to wait until they have another chance to go back to 2019 which I don’t think they should do that because 2020 is pretty bad. It is the best show I’ve ever watched!